RADO created by: Rado and Triinu, two a little bit crazy people that decided to open their own restaurant whilst others were closing.
They used to run restaurant Ribe together but now they have created restaurant Rado in the same location.
As they didnt want to leave Vene 7, so the only solution was to open the restaurant together. Even if they wanted to kill each other few days before the opening, there is no one else they would do it with. They can be 100% honest with each other and this is how they can be sure that they are giving the best possible quality to guests.
Triinu dreamt of having her own restaurant since she worked at a bar in New Zealand. Rado would not be a proper head chef, if he would not have the same dream. Now as the opportunity knocked on the door, they knew that it won’t knock twice.
Rado came to Estonia for the good weather (read: women) – now he found one thunderstorm to open a restaurant with, because riding tractors isn’t Triinus only skill – she happens to be also a very smart business woman and an exeptional host with the widest smile in town. Combined with Rado’s culinary skills and charm, they make the recepie for an amazing restaurant. 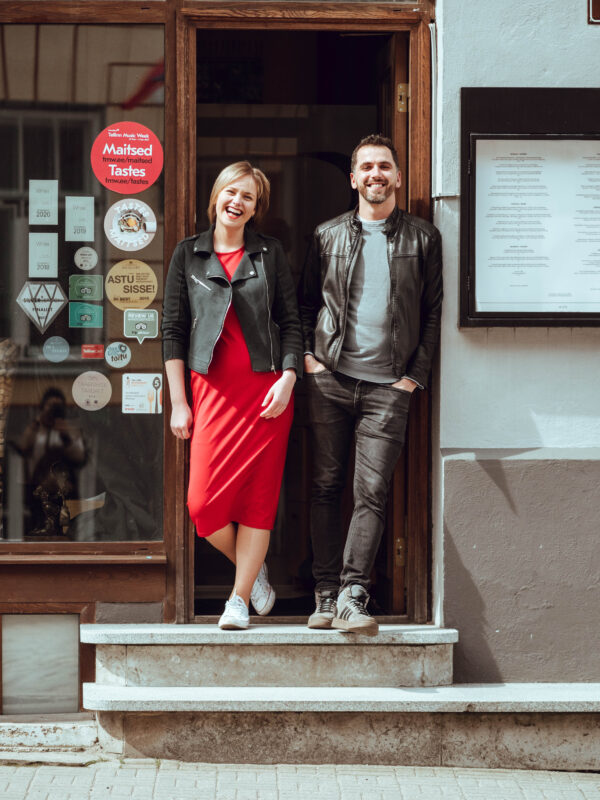 Everything you see in their restaurant has been done by them, their friends and families. Both of them and their friends can agree that sanding was the worst job. But they gave old restaurant rooms a totally new face – a face of Rado.
Rado could now become a professional ceiling painter. Triinu needs a manicure after the works. But thanks to all of this hard work – Rado with it’s warm and inviting atmosphere is the place to be.
They want to welcome you in their restaurant as they would welcome you in their homes with great care and attention in cosy amosphere.